Farming is considered a key industry with a fundamental role in contributing to the national and global economy. Despite significant progress in farming technology, modern farming is still associated with many hazardous exposures, especially dust-related ones, and is consistently identified as one of the most dangerous industries in which to work from a health and safety perspective.

Whilst it is consistently acknowledged that the unique nature of farming involves co-exposures to multiple hazards, one of the main hazards is exposure to particulate air pollution generated during agricultural operations and processes. In fact, agricultural workers are habitually exposed to high levels of particulates which are typically generated during field operations and consist of dusts originating from unpaved roads and unpaved access roads to crops and plantations.

Eco-Soil Group advanced technologies can help you provide a safe workplace for your farmworkers and increase your crops yields by keeping your roads free of dust all year around. Whether you are thinking of full-depth road stabilization, a topical surface layer or simply keep your unpaved roads econTDS®, we can develop a customized plan that will help you solve your problems of dust, road and soil stabilization and erosion control. 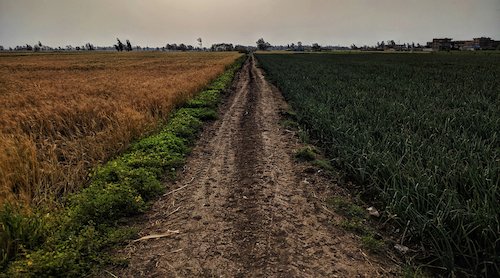 Unpaved roads dust has several detrimental effects on plant health. First, the layer of dust on plant leaves could result in plant shading, which would lower photosynthesis. Second, trace elements in the dust may be toxic to plant biological processes and third, large quantities of dust on the soil’s surface may draw subsoil moisture. This would leave less water available for plant growth.

All of our products have been verified by independent organizations and manufactured by the highest standard of quality.

It is time to use NEW method to stabilize soils and suppress dust.